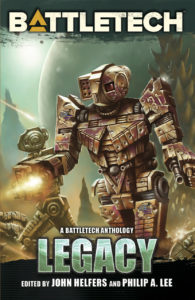 The long-awaited wide release of BattleTech: Legacy is almost here! The groundbreaking anthology is now available for pre-order in both eBook and print-on-demand formats.

“Legacy” weaves stories by Kevin Killiany, Craig Reed, Philip A. Lee and 12 other authors around the 350-year history of one Grasshopper ‘Mech and its many owners.

The eBook retails for $4.99, and the print on demand anthology will retail for $11.99. Both have a street date of Monday, September 17.

IN THE 31ST CENTURY, LIFE IS CHEAP…

A Draconis Combine warrior struggles with immoral orders in the First Succession War. A House Davion MechWarrior participates in a risky heist as part of Operation Guerrero. A history buff battles the Word of Blake during the Liberation of Terra. What do these MechWarriors have in common? Each one pilots the same BattleMech, a survivor that has been repaired and rebuilt countless times throughout its long and bloody 300-year lifespan.

The seventy-ton GHR-5H Grasshopper can outmaneuver and outlast some of the most fearsome enemy ’Mechs, making it an invaluable asset to battlefield commanders. Even an incapacitated Grasshopper will be rebuilt to fight another day, with a new pilot at its controls, because MechWarriors can be replaced, but ’Mechs cannot.

In BattleTech: Legacy, thirteen all-new stories chronicle the fortunes and tragedies of a single ’Mech across several tumultuous points in its wide-ranging combat history. Veteran BattleTech authors Kevin Killiany and Craig A. Reed, Jr. bookend this exciting collection, while other familiar names and new blood explore important moments in this ’Mech’s history of constant, unmitigated warfare that leaves no corner of the Inner Sphere untouched.