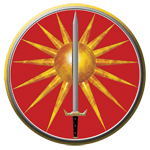 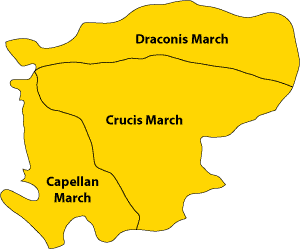 Seen by many as a realm that glorifies warfare, House Davion’s Federated Suns has one of the Inner Sphere’s most capable military forces, and their First Prince is seen as one of the mightiest rulers in the Sphere. Primarily settled and ruled by descendants of Terra’s Western Europe, the Federated Suns has adopted a nobility system based on feudal England and France, and professes the ideals of personal freedom and rule of law above all else.

House Davion’s archenemies are its neighbors, House Liao’s Capellan Confederation and House Kurita’s Draconis Combine. During the Fourth Succession War, the Federated Suns united with House Steiner’s Lyran Commonwealth to create the Federated Commonwealth. Under this union, Houses Davion and Steiner conquered half the Confederation, and went on to challenge the might of House Kurita in the War of 3039. But this alliance eventually sundered during the FedCom Civil War in the 3060s. Now threatened by the Word of Blake and their Jihad, the Federated Suns once more stands beside its old enemies, united against a common threat. 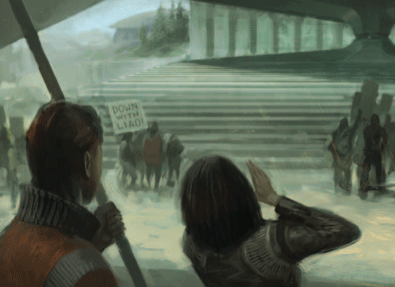 The Federated Suns is very liberal when it comes to personal freedom and trade, with a free market economy that allows its citizens to pursue personal profit. Militarily, they prefer combined-arms warfare and strategic initiative, valuing the virtues of logistics and maneuvering over brute force and savagery.

For the continuing story of the Federated Suns, see Jihad: Final Reckoning…

During the long history of House Davion many interesting and unique individuals have made the Federated Suns what it is today. Below are just a few of the movers and shakers who have had an influence on the character of the FedSuns.

Since being named Regent again after the end of the FedCom Civil War, Yvonne has seen her nation through the fires of the Jihad with a strength that many would not have believed possible from the young woman they knew over a decade earlier. Though she was denied her own capital world by the Blakist occupation of New Avalon, Yvonne and her husband Duke Tancred Sandoval coordinated the FedSuns’ resistance from a hidden location until they day they could reclaim New Avalon. Since then, she has adopted a new slogan for her nation’s future: Never Again.

Prohibited from becoming First Prince herself by her lack of military service, Yvonne hold the Davion throne in trust for her son Harrison.

Arguably, no single individual has had more effect on the Inner Sphere in the thirtieth century than the man many called “The Fox”. Though he only gained the throne upon the death of his older brother, Hanse Davion quickly showed the other Great Houses that he was a man born to rule. Recognizing the great potential in Archon Katrina Steiner’s peace proposal, Hanse wed Katrina’s daughter, Melissa, and united the Federated Suns and Lyran Commonwealth into the powerful Federated Commonwealth, launching the Fourth Succession War as a gift for his new bride. The union also produced five children who would each play their own major role in interstellar affairs: Victor, Katherine, Peter, Arthur and Yvonne.

Alexander Davion was born into a time of turmoil in the Federated Suns and lived his early life under the control of a council of regents. When a civil war broke out between the fractious regents—including his two aunts—Alexander came into his own fighting against all sides to take possession of the throne that was his birthright. Charismatic and decisive, Davion led his nation to join Ian Cameron’s new Star League and reigned as First Prince for many decades before a degenerative neural disorder forced him to take a less active role. In many ways, Alexander was the father of the modern Federated Suns and his descendents continue to rule to this day.

The strength of a nation can be measured in the quality of its military and the men and women of the Armed Forces of the Federated Suns are one of House Davion’s most important assets. Below are just a few of the iconic military commands that have defended the FedSuns from its enemies for centuries.

For more information on the FedSuns military, see:

The siege of New Avalon nearly spelled the end for the proud Davion Brigade, destroying two commands outright and devastating three of the remaining units.

The Second Davion Guards did not take part in the siege of New Avalon, but it has its own reasons for hating the Word of Blake. After a bitter six-month campaign across the frozen expanses on Angol, the second was finally forced to concede the world to Blakist invaders. The Second did not travel far though—relying on their large aerospace arm, a legacy of their former commander fleet admiral William Kossacks, they commandeered additional transport assets to ensure full mobility for the reduced command. Eschewing HPG communications for less reliable but more secure fax technology, the Second has remained highly mobile and struck at the Word repeatedly over the several years of the New Avalon siege. Only recently has the unit been pulled back for rest and refit, with the Heavy Guards taking over their harassment role.

Formed from SLDF troops that chose to remain behind during Kerensky’s Exodus, the Lancers had one RCT representing each of the Crucis March administrative areas. The FedCom Civil War was the first time a Lancer RCT was ever fully deactivated and the Jihad not only destroyed plans to rebuild but also reduced the brigade in strength even further.

Despite the devastation this brigade has suffered from enemies of the Suns, they have fully stepped behind the Princess-Regent’s new defensive policies, agitating for increased defensive funding for the Crucis March and participating in numerous aid and relief missions across the March.

Fractured along allegiance lines in the FedCom Civil War, the Brigade of Hussars was heavily damaged at the onset of the Jihad. With their commander, Field Marshal William Waters, trapped on New Avalon, the Brigade lost further cohesion and command direction, paralyzing the surviving units. Only the Twentieth Hussars participated in major offensive combat operations, suffering extensive damage during the Capellan Confederation’s counterassault. Its survivors were eventually folded into the Twenty-second.

Throughout the ages, the military of a nation has grown to depend on certain weapons of war more than others. While they may be used to some extent by their enemies, the below combat units are considered to be iconic for House Davion.

For more information on these (and other) combat units, see:

House Davion has long favored the autocannon, and perhaps no ’Mech embodies this preference more than the Jagermech. With a Mydron Model C and Mydron Model D cannon in each turret-style arm, Jagermechs spew forth a wall of shells at both ground and air based targets. These heavy weapons did force the designers to equip a reduced amount of armor. As the JagerMech is in its element while supporting friendly forces, this is often only a minor hindrance.

Originally designed during the Star League, the Devastator was never mass-produced. The rediscovery of advanced technologies in the 3040s finally allowed Davion engineers to dust off the Devastator‘s blueprints and begin production.

On par with the largest ’Mechs to ever stride the battlefield, Devastators combine a terrifying pair of Gauss Rifles with two particle cannons for a massive ranged barrage, and use a small array of lasers to finish off any that survive. The centerpiece of many Davion assault forces, a single Devastator can wipe out an entire lance of smaller ‘Mechs without breaking a sweat.

This venerable tank dates back centuries, and has been the front-line main-battle-tank for many militaries throughout its existence. Combining a particle cannon with a ten-rack of LRMs, the Manticore can heavily engage an enemy at range, switching to a medium laser and six-pack of SRMs to finish off its prey. Manticores aren’t fast, but with their varied-range attacks and sturdy armor they can prove to be a very serious threat to many ‘Mechs. Manticores are a favored component of Davion tank formations, and few RCTs lack them. Recent upgrades have only improved the design, most recently by loading the tank with a Heavy PPC.

NOTE: These images depict Manticores painted in the colors of other factions. As Federated Suns Manticores become available on CamoSpecs Online, they will be replaced.

Designed to replace the original Infiltrator, itself the first Federated Suns battle armor suit, the Mk.II shares little with the older design. Equipped with stealth armor, substantial jump capabilities, and an excellent MagShot Gauss Rifle in its arm, the Mk.II—also known as the “Puma”—is somewhat thin on armor compared to other designs in its weightclass. Fortunately, the range of the MagShot combined with the stealth systems make it difficult for other armor suits to fight back. As a result, most AFFS RCTs and special-forces teams feature Infiltrator Mk. IIs.

When House Davion attacks from above, it is usually with these small but distinctive-looking fighters. Their graceful frames tipped at the front by medium-laser barrels, Sparrowhawks move in quickly to hit a target with their energy weapons and bombs before escaping return fire at high speeds. Commanders favor these fighters as excellent first-response defenders thanks to their high acceleration. Though small, Sparrowhawks are surprisingly tough, able to take a pounding many other light fighters would not survive. Popular since its inception early in the 30th century, the craft is rare outside of Federated Suns space following the factory’s destruction early in the Succession Wars.

To support its policies and goals, the Federated Suns relies on a network of corporations to manufacture everything from consumer goods to computer equipment to military hardware. Below are just a few of the industrial leaders that create the infrastructure of FedSuns society.

While diversity should have proven to be a shield for catastrophic damage, General Motors’ great size has played against it, and the corporation has suffered extensively in the Jihad. The loss of Addicks to the Blake Protectorate and Galax to bioweapons, repeated attacks on the New Valencia facilities, and punitive strikes on its production facilities on Talcott and Waunakee would be enough to send any company into a tailspin. The near-total destruction of the ’Mech factories and heavy damage to the surrounding conventional facilities on Kathil as well as the destruction of their orbiting shipyards simply added to the existing blows. General Motors has indeed teetered on the brink of breaking up, but strong management and a heavy demand for war materials has kept the company operational.

Achernar owes it survival mainly to the inspired (though some would call it draconian) foresight of the late Jackson Davion. After the opening salvos of the Blakist assault left Avalon City’s Industrial sector and Achernar’s main BattleMech complex a smoking ruin, Marshal of the Armies Jackson Davion placed Achernar under martial law.

Once New Avalon was free of Blakist occupation, Achernar quickly emerged from hiding. With permission of the Sun’s government, Achernar partnered with Corean Enterprises and announced it would complete its first limited production run of the Legionnaire BattleMech from the underground Albion Technologies’ manufacturing facility within six months, a promise they delivered upon in March of this year.

The total destruction of Fed-Boeing’s Galax Megacomplex could well have signaled the death knell for many corporations. But just as they survived the Succession Wars, Fed-Boeing managed to survive the brutality of the Jihad—so far.

While their main finishing facilities were wiped out by the Blakist assault, Fed-Boeing long ago spread its facilities over a score of systems. Immediately after the attack, spare parts were flowing to the armies of the Suns, uninterrupted by the loss of the central facility. Leveraging this diversified industrial base, as well as extensive cash reserves, Federated Boeing engineered a merger with longtime partner Universal Air. The merged companies operate under the Federated Boeing name and ticker symbol, and the Delevan shipyards serve as their headquarters.