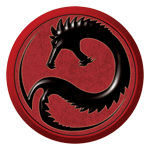 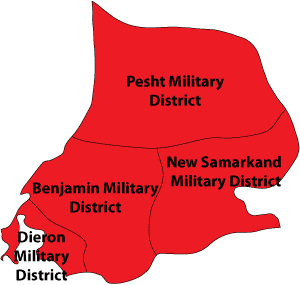 Patterned on the culture of feudal Japan, and ruled by a hierarchy of warlords loyal to the shogunate ideals of the ruling House Kurita, the Draconis Combine is a realm whose warriors and citizenry embrace the tenets of bushido—the ancient Japanese Way of the Warrior. To the people of the Combine, honor and duty are the very cornerstones of society, without which there can be nothing. While these social mores have made the Combine’s military one of the most fearsome and fanatical on the battlefi eld, it was the modernist reforms of Coordinator Theodore Kurita that transformed the DCMS into an even more deadly force.

Hard pressed during the Clan invasion—to the point where their own capital of Luthien teetered on the brink of a Clan occupation—the “Dragon” repaid its would-be conquerors by leading the charge to Annihilate Clan Smoke Jaguar. Today the Combine is riddled with internal enemies in the form of the subversive Black Dragon Society, while fi ghting a war of attrition against the Word of Blake. Thus, Coordinator Hohiro Kurita and his supreme warlord, Kanrei Kiyomori Minamoto, now struggle to achieve the twin goals of unifying their realm while turning back the deadly Word of Blake offensive. 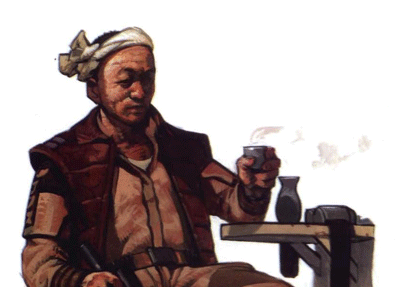 A particularly harsh and xenophobic society, the Draconis Combine maintains a socialist market economy and a rigid leadership divided into social castes. Militarily, the Draconis Combine Mustered Soldiery continues to struggle with the competing ideals of personal honor and glory, and the need to function as a unit against a determined enemy. Thus, in battle it is as common to see a lone Combine warrior challenge a superior force as it is to see entire formations combine their might to bring down an enemy.

For the continuing story of the Draconis Combine, see Jihad: Final Reckoning…

During the long history of House Kurita many interesting and unique individuals have made the Draconis Combine what it is today. Below are just a few of the movers and shakers who have had an influence on the Combine’s character.

The early days of the Jihad were not kind to Hohiro Kurita, as first his father succumbed to a stroke and coma and then Hohiro himself was captured by Word of Blake on the planet Dieron. Though he was rescued a few months later, he suffered the mental and physical effects of his ordeal for years after, which allowed his Gunji no Kanrei (“Deputy for Military Affairs”) Kiyomori Minamoto to exercise power over the Combine’s government. Now, with the war winding down, Hohiro is exerting his authority more and laying plans for the speedy recovery of his nation. But while the Word of Blake may be an shrinking threat, there still remains the thorny problem of the conservative and deadly Black Dragons, who will not hesitate to pressure the Coordinator to undo all of the reforms his father put in place.

From a young age, Theodore clashed with his father over their conflicting methods for preserving the Combine from its enemies. Whereas Takashi was traditional and conservative, Theodore was willing to embrace alternate ideologies and the dregs of society if it would strengthen the realm. The two headstrong and charismatic men came to an uneasy truce after Theodore’s reforms of the milittary saved the nation during the War of 3039, but the tension remained in their relationship until Takashi’s death. Theodore served as First Lord of the reborn Star League and saw his daughter enter into a relationship with Victor Steiner-Davion, only to die at an assassin’s hand during Victor’s civil war with his sister Katherine. After the Word of Blake launched their Jihad and the Black Dragons staged a coup on Luthien, Theodore suffered a stroke and fell into a coma while planning a campaign to recover his capital. He died two years later, leaving that fight to his son.

To the people of the Federated Suns, Takashi Kurita was a symbol of the evil and oppression of the Draconis Combine. To his own people, however, Takashi was the Dragon, the living embodiment of the traditions and culture that had made their nation strong. As Coordinator, he frequently placed the good of his nation above his own desires and feelings or even his own family. His struggles with his son Theodore over the modernization of Combine society and especially the military were epic and were only fully resolved with the coming of the Clans. Takashi lived by a strict code of samurai honor that saw him give up his own life rather than bring further dishonor upon his nation by resurrecting a pointless feud with the mercenary Wolf’s Dragoons.

Hehiro Kurita represented the return to greatness of the Kurita family after the long regime of the usurper Von Rohrs dynasty. After emerging from behind his strong mother, Siriwan McAllister—who herself reigned for nearly half a century—Hehiro quietly led his nation into the Star League, all the while ensuring that the Combine would enjoy many concessions from the Camerons while maintaining its cultural traditions. As Coordinator he was logical and methodical in his dealings with other realms and did not hesitate to discipline his own nobility when their actions threatened the nation. Despite being recognized as one of the greatest of all Kurita Coordinators, his legacy was overshadowed by his son and successor, Leonard, whose madness brought the Combine to the brink of ruin.

The strength of a nation can be measured in the quality of its military and the men and women of the Draconis Combine Mustered Soldiery are one of House Kurita’s most important assets. Below are just a few of the iconic units that have defended the Combine from its enemies for centuries.

For more information on the Combine military, see:

Considered the pride of the DCMS, the Sword of Light regiments are some of the Combine’s most elite units. But even their traditional fanaticism did not hold back the seeds of betrayal and treason during the Dragon’s darkest time in recent memory.

The First Sword of Light has remained in the thick of the battle, fighting Davion aggression in the Proserpina theater, raiding Blakist worlds in the Protectorate, and currently serving as the spearpoint unit of Devlin Stone’s Combine theater command. The regiment fights with nearly supernatural rage, rivaling reports of Ghost Bear violence, and it has become the symbol of the Dragon’s wrath.

The Combine’s Ghost Regiments were stationed along the Federated Suns border when the Jihad broke out and Luthien went dark. While the Tenth Ghost fought a losing battle against the Blakists in the Dieron meat-grinder, the other regiments were holding off AFFS forces as they jumped the border. While most of the Ghost regiments gave as good or even better than they got, the loss of command and control from Luthien and the disappearance of Hohiro Kurita was demoralizing and paralyzed many of the DCMS units, including some of the Ghost commands.

Increasingly distressed over the perceived slights by the Imperial Throne regarding the fate of their people and the lack of cohesive command, the Arkab Legions finally reached a breaking point when Arkab suffered a horrendous asteroid strike and cries for aid and assistance were virtually ignored.

Disgusted with the continued breach of trust by the Dragon, the Arkab Legions left their duty stations and returned to their home systems in order to protect their people and render aid. As protest mounted, the Legions grew deaf to the demands being made by the Kanrei—believed by the Azami to be nothing more than the Coordinator’s puppet master—and remained in place.

To support its policies and goals, the Draconis Combine relies on a network of corporations to manufacture everything from consumer goods to computer equipment to military hardware. Below are just a few of the industrial leaders that create the infrastructure of Combine society.

Probably the biggest corporate conglomerate within the Combine and considered the Dragon’s iconic BattleMech manufacturer, LAW is a foundational lynchpin of the Kuritan empire. LAW’s primary loyalty has always been to the Kuritan throne, structuring its hierarchy and business plans to the whims of the Coordinators. Nothing during its centuries of existence has truly threatened the massive corporation—until the Jihad.

As neutral as a weapons manufacturer can get on the interstellar political stage, Independence Weaponry services and supplies most major military manufacturers across the Inner Sphere. Based in the Combine, IW operates less as a corporation and more as a conglomerate, with each division responsible to a particular faction and their protocols. This type of setup leads to some odd situations, such as preventing any IW-manufactured weapons in the Combine from being sold, transported, or used in the manufacturing process of Federated Suns equipment, despite the fact that the weapons are identical to those produced elsewhere.

A key company in the vast holdings of the late Chandrasekhar Kurita, HTE is considered a cornerstone in the electronics market within the Combine. Corporate practices instituted by “Uncle Chandy” have led to sales and exports outside the Combine seeing a nearly fifty percent markup in price simply to offset the much lower and affordable prices offered to the citizens of the Dragon.

HTE supplies both military and civilian electronic components to several large corporate clients, including LAW, Wakazashi, IrTech, Ceres, and Federated-Boeing. In addition, the corporation has several arrangements and agreements with second-tier corporations such as Sapphire Sunset Metals, Contard Mining, StarCorps, and Isesaki Shipping.