Named for a genetically engineered Eden predator, Clan Jade Falcon has historically ranked among the most powerful and active Clans. Aggressive and tenacious, this Clan constantly strives to advance its own agenda without losing sight of Nicholas Kerensky’s teachings (as the Falcons interpret them). Staunch traditionalists, the Falcons were the driving force behind the development of the Crusader philosophy.

Clashing with their long-time rivals Clan Wolf in the years after the humiliating defeat at Tukayyid, Falcon manipulations in the Grand Council resulted in the Refusal War, which weakened the Falcons and nearly destroyed the Wolves. Under new Khan Marthe Pryde, the Falcons rebuilt and several times invaded the Lyran Alliance to demonstrate their strength to friend and foe alike. By the beginning of the Jihad, they had been quiet for a few years but soon enough felt the sting of Blakist attacks. 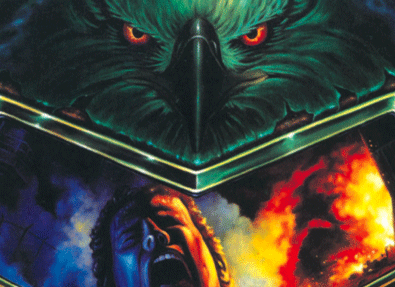 With Clan Ice Hellion invading shortly after the start of the Jihad, the Falcons had two foes to worry about. Though they made short work of the Hellions with the help of their allies Clan Hell’s Horses, the Falcons grudgingly allied with Devlin Stone’s Coalition to fight the Blakists. Several unfortunate clashes with other Coalition members have so far not diminished the Clan’s dedication to seeing the Word of Blake’s threat removed once and for all.

During the long history of the Clans many interesting and unique individuals have made Clan Jade Falcon what it is today. Below are just a few of the movers and shakers who have had an influence on the Falcons’ character.

Capable, fiercely intelligent and utterly dedicated to the advancement of her Clan, Marthe Pryde has few weaknesses. Even her legendary temper, a frequent problem in her younger days, has largely yielded to her iron-willed desire to keep her Jade Falcons in the top ranks of the Clans. She is pragmatic and does not shrink from doing whatever is necessary to keep the Falcons two steps ahead of their enemies.

As the sibkin of the legendary hero Aidan Pryde, Marthe has had a lot to live up to since the defeat at Tukayyid. Recent events have convinced her that she must ally her Clan with other powers, even traditional enemies like Clan Wolf, if the Falcons are to weather the threats arrayed against them.

The legendary Jade Falcon hero Aidan Pryde achieved his fame after an unorthodox career that many within his Clan saw as disgraceful. After failing his initial Trial of Position, he impersonated a freeborn warrior and succeeded on his second try. Aidan—now known as Jorge—served in unremarkable units until his defense of Kael Pershaw’s genetic legacy gave him the opportunity to reveal his true identity and claim the Pryde Bloodname.

Even so, Aidan was looked down upon by most Falcons and shuffled between less desirable assignments for nearly a decade. When the disgraced Falcon Guards were reconstituted, a disgraced officer was a natural choice for command. Star Colonel Pryde worked hard to shape the Guards into a formidable force and won over many doubters with their performance on Tukayyid. Aidan sacrificed himself during the final retreat from Tukayyid to ensure that every one of his people would make it away safely. In death, he achieved the glory he never could in life and many newer Falcon warriors revere him as the epitome of a true Clan warrior.

The Pershaw line has traditionally produced solid warriors with a reliable record of victories in battle and Kael was no exception, though his true gift was in administration, logistics and intelligence. Even more than any skill he possessed on the battlefield, his ability to tease out the weaknesses of his foes and cannily exploit them is what has raised him to high position within his Clan. Despite his disagreeable personality and grotesque appearance—an inability to tolerate genetherapy required any major injuries to be corrected with cybernetics—Pershaw was respected by many senior commanders for his sharp analytical mind. He took on leadership of the Falcons’ intelligence operations and molded them into a vital part of the Clan’s functionality.

During the recent internal troubles among the Falcons and the Clans as a whole, Pershaw led several operations in the Periphery against both the invading Ice Hellions and rebellious members of the scientist caste. He died during one such operation, but not before ensuring that his target would no longer pose a threat to the Falcon Clan.

A young company commander in the Royal Black Watch at the time of the Amaris Coup, Elizabeth Hazen spent the years of the Usurper’s reign as a key member of a guerrilla organization on Terra. After the war, she followed General Kerensky into exile and served on his staff.

When chaos broke out and the General’s son formed the Clans, Hazen was chosen as one of the original forty Khans. She led her Jade Falcons through the Klondike campaign with honor, though they failed to win the patronage of the ilKhan himself. Despite her advanced age at the time, she led her people with a strong hand and provided the Falcons with a solid foundation from which they could build themselves into one of the most powerful Clans.

The core strength of any Clan is its warrior caste and the men and women of the Jade Falcon touman continually strive to prove why their Clan deserves to rule a reborn Star League. Below are just a few of the iconic commands that have preserved the ideals of Kerensky for over three hundred years.

For more information on the Falcon touman, see:

Gamma Galaxy has suffered several major losses in recent years. Galaxy Commander Amelia Icaza was killed during a Blakist attack on Gamma’s headquarters. Ristar Diana Pryde, daughter of the famous hero Aidan Pryde, was subsequently killed during the so-called Donner Bomb incident on Arc-Royal that took out a number of other prominent Clan and Inner Sphere leaders. Assuming command of Gamma Galaxy in hopes of stabilizing the unit following these losses, the former Wolf warrior Quinn Kerensky quickly put down a couple of traditionalists that objected to a Kerensky leading the Galaxy. It remains to be seen whether she can rebuild Gamma’s strength to pre-Jihad levels.

Delta Galaxy is under the command of saKhan Samantha Clees, who has led the Gyrfalcons for over twenty-five years. When her duties as saKhan take her elsewhere, her longtime aide Star Colonel Uvin Buhallin fills in. During the recent Ice Hellion Incursion, Delta took an active role in repelling the newcomer Clan and suffered terrible losses in those actions. Clees and Buhallin are currently rebuilding their Galaxy while the Jade Falcons become more and more involved with the fight against the Word of Blake.

Though they have lived through the same conflicts as their brethren in Gamma and Delta, the warriors of Iota Galaxy have had a worse time of it. Not only were they attacked by the Blakists, who used dishonorable tactics against the Falcons, but they suffered the ignominy of having not one but two Galaxy Commanders dismissed for failures on the battlefield. Gran Newclay and Mar Helmer, both Falcon commanders of long tenure, have been replaced by Temple Clees following their poor performance against the Ice Hellions along the Periphery border.