Stay informed about what’s new by checking out Latest Releases and Coming Releases.

To convey the universe and board game rules to the BattleTech community (as well as demonstrate how players can take that universe and integrate it into the game system), Catalyst Game Labs publishes several different lines of rulebooks, sourcebooks, Technical Readouts, and so on, described below. 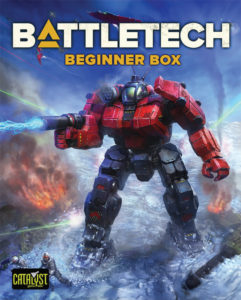 If you’re new to the BattleTech board game, dive into the free Quick-Start Rules and Universe PDFs on the New To BattleTech page to get a quick taste of the universe and rules. The BattleTech: Beginner Box is the starting point for all the adventures to come, offering a great taste of BattleTech for a fantastic price. From there, upgrade to the BattleTech: A Game of Armored Combat boxed set, which adds more ‘Mechs, more battlefields, and more gameplay options. 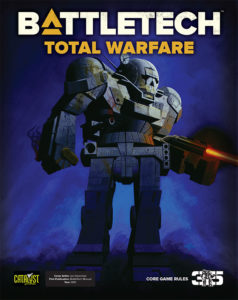 The current award-winning BattleTech core rulebooks expand upon the rules from the Beginner Box and A Game of Armored Combat, while taking a “kitchen sink” approach, meaning they provide a vast smorgasbord of rules and options from which each player group gets to decide what they’ll use each time they play. Game Aids are player tools that fall outside of any other category, such as the A Time of War Gamemaster Screen. Once players have tried their hands at BattleTech, they can jump into the further excitement of the BattleTech universe through a Starterbook. Each Starterbook is completely self-contained, including the record sheets to play the additional ’Mechs provided in each volume. Pre-filled record sheets for the various units found in the technical readouts are published separately. HexPacks are a flexible map system aid for the BattleTech board game. Designed for use in conjunction with other pre-printed mapsheets (such as those from the Introductory Box Set), the system’s flexibility allows for easy modifications to existing mapsheets, increasing the enjoyment of a given scenario as players quickly change the terrain to bring new excitement to each game they play! A booklet contains two ready-to-play scenarios, as well as optional rules for increasing your gaming fun. Record Sheet books come in two flavors: a printed format that includes many of the more common units plus additional rules and scenarios, and a PDF format that contains an unabridged listing of all units without the additional information. Pre-filled PDF record sheet books can be purchased from the BattleShop. The Campaign is a brand new style of book, expanding upon the Track system presented in the Starterbooks. Designed to comprehensively cover an Era, players can use a Campaign sourcebook to run games across a wide swatch of time. Whether selecting individually tracks for a given year or running a large campaign across multiple worlds and years, a Campaign sourcebooks provides a full toolbox for any player group to throw down a wide selection of exciting games on the table. The Era Report series explores the most exciting past eras of the BattleTech universe. Designed to introduce new players to a part of BattleTech’s rich history (or, bring older players back for a fresh look at such periods), they provide an overview of the realms, major personas, and technologies that made these past eras remarkable, while incorporate both role-playing and battle campaign support for these time periods. The Historical series delves into the pivotal wars of the Inner Sphere’s thousand-year history, with important personalities, maps of individual attack waves and regiment listings, along with a campaign framework that allows players to enact every aspect of each of these important events.

From the War of 3039 to Reunification War, these sourcebooks allowing players to explore the stunning events of the historical wars that have shaped every faction to date. The free BattleTech Universe PDF provides a taste of the Great Houses of the Inner Sphere, while touching upon the other myriad factions such as The Clans, Periphery, and mercenaries. Each faction represents a fully fleshed-out star-spanning realm, with its own history, cultural identity, fighting style and so on.

The following sourcebooks expand those faction settings in various ways. From the Handbooks that provide an in-depth look at each faction’s history and culture, to Masters And Minions: The StarCorps Dossiers that provides an overview of the most influential personalities (along with a brief overview on the current state) of a given faction during the Jihad Era: each helps bring the universe alive, immersing players into the BattleTech gaming experience. BattleTech has always been a dynamic universe with progressing storylines that shake things up, uniting and shattering factions, developing characters into beloved (or despised) icons that wage a valiant struggle or die a glorious death. Such events breathe life not only into the fiction players read, but the games they play.

The current universe-shaking storyline that’s in its final stages is the Word of Blake’s Jihad, begun with the publication of Blake Ascending: A Jihad Plot Compilation. Fiction has always played a seminal part in developing and fleshing-out the BattleTech universe, from short fiction in sourcebooks, to full-length novels; nothing works as well to immerse a player into the war-torn 31st century. Catalyst Game Labs is releasing brand new fiction, while also starting to make available all previously published novels in epub format. Beyond the printed rulebooks and source material for BattleTech, Catalyst is releasing numerous electronic publications that further expands the universe and rules in a myriad directions. These new, E-publication-only published products (from e-books to PDFs) offer a quick, easy fix for the MechWarrior jonsing for more of the 31st Century they crave. With almost thirty years of history, BattleTech has hundreds of rulebooks, sourcebooks, and scenario packs that are long out of print. While some of those books have updated versions currently in print, for long years most of that material simply was unobtainable. Now those books are once more available, in PDF format, for use by any player or gamemaster.