The Great Houses have dominated most of the Inner Sphere’s two thousand star systems for centuries. Each House is ruled by a single individual who wields immense power, shaping the futures of trillions of people. These dictatorships, benign or otherwise, sprang up in direct response to humankind’s expansion to the stars. After the collapse of the central government that supported humanity’s first wave of expansion, regional power brokers arose. They wrought the empires that exist today, binding nearby planets together with various forms of feudalism.

The vast distances between planets made interstellar travel a rarity. Until humans developed the HPG system in 2630, interstellar communication was extremely difficult and unreliable. This meant that each world enjoyed considerable autonomy. The warlords who ruled the planets rarely faced the risk of overthrow by an invading military force. Variations on this feudal system remain in place today, resulting in a patchwork of mostly independent local governments overseen by a neo-feudal lord.

In keeping with their feudal origins, all the Inner Sphere nations include a noble class. Many noble titles are common to several nations. Terran nobility originated with the feudal system of government most prevalent in the European Middle Ages, when a sovereign delegated responsibility and authority over an area to select subjects in exchange for a personal oath of fealty. These subordinate leaders received a patent of nobility allowing them to use a title commensurate with their importance.

Nobility in the thirty-first century is largely hereditary, with the designated heirs of nobles inheriting their parents’ rights, estates and responsibilities. Though most sovereigns can grant titles to their subjects, this practice is relatively rare—even for MechWarriors, the modern equivalent of knights.

Click on the Great Houses in the map below to jump to a faction page. 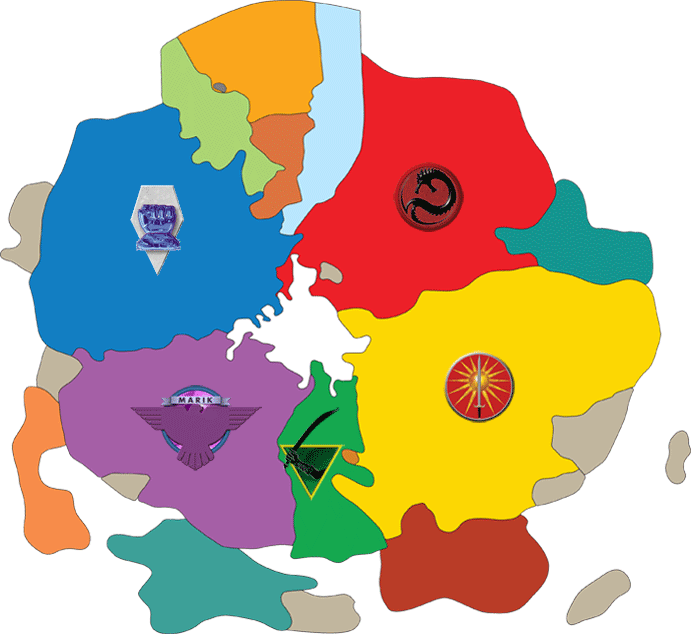 In the pages that follow, you can read about the various Great Houses of the Inner Sphere, their trials and tribulations, the movers and shakers who drive them to glory or tragedy, the fabled commands and powerful corporations who provide the backdrop against which so many stories are told. Each page contains profiles of important personalities, units and companies, as well as suggested readings to give you a feel for the flavor and history of that faction.