GETTING STARTED: AS A READER OF FICTION…

From the moment Decision at Thunder Rift published in 1986, novels have consistently proven the best way to convey the fantastic stories that have kept fans coming back to the BattleTech/MechWarrior universe for three decades.

If you’re new to the BattleTech universe and its fiction, and have not already done so, feel free to dive into the free Quick-Start Rules PDF—which contains two short stories—and the Universe Guide PDF on the New To BattleTech? page to get a quick taste of the fictional setting. Whether you choose to dive into those free PDFs, or not, you can also start your journey to endless hours of reading enjoyment right here.

The Books section of the website contains dozens and dozens of choices, but don’t let that intimidate you. If the sourcebook fiction is where you’d like to delve, just ask yourself questions like those above about your experience with the Universe Guide, and then use the product categories to zero in on where you’d like to start!

While almost every BattleTech sourcebook also contains a small amount of story fiction, there are a legion of novels, short stories, and so on, outside of the sourcebooks.

While new, original novels will publish in electronic format in the future, the entire back catalog of classic BattleTech novels is making its way to epublication. Several dozen novels are already available on the Fiction (E-pub) page, with more on the way.

The Warrior: En Garde is set in the Succession Wars Era, covering the Fourth Succession War. The Warrior Trilogy is a great starting point as it lays the foundation leading to the setting as described in the Introductory Box Set, as well as Technical Readout: 3039, both of which are part of the “Getting Started: As A Board Game” path into BattleTech. 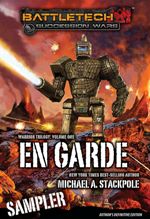 WARRIOR: EN GARDE: TAKE A FREE LOOK AT THE FIRST 123 PAGES OF ACTION!

Stripped of his rank, exiled Justin Allard is given one last chance to save his honor—by risking his life in the gladiatorial arenas of Solaris VII. But his newest Game World opponent—more skilled at ‘Mech-to-’Mech combat than any other rival—raises the stakes even higher. It’s Justin’s own half brother, Daniel, lance commander in the dreaded Kell Hounds mercenary battalion.

But Daniel has more serious worries than dealing with his estranged and bitter brother. Princess Melissa Steiner, heir apparent of the Lyran Commonwealth, has been hijacked-and the future of the Inner Sphere depends on her fate.

Both Daniel and Justin face fierce battles, but in the Inner Sphere, where nobles have schemed for centuries to win the ultimate power, those who interfere with the Successor Lords are sometimes called heroes. And sometimes called victims.

Continue the adventure with the full Warrior: En Garde epub.

More Epub Fiction
The Epub Fiction List provides a great Chronological List for easily finding your way to other epub fiction beyond the Warrior Trilogy.

Another great source for fiction is BattleCorps, the only online official short fiction publication for BattleTech. With over a million words of fiction available, this fiction subscription website contains a legion of stories across every faction and Era. BattleCorps Fiction Sampler
From the Succession Wars to the FedCom Civil War, this free PDF brings six short stories from the best of the BattleTech novelists — Michael Stackpole, Loren Coleman, Blaine Pardoe — while introducing readers to new authors making their mark. Regardless of how you enjoy your BattleTech, there’s a story here for you. (You may have already come across this PDF at BattleTech.com.)