Like its namesake, Clan Ghost Bear is a conservative hunter. Never hasty, the prevailing Ghost Bear ethos is “wait and see.” But when the Bear finally moves, the results are swift and often extreme. Once the Bear has chosen its target, nothing can stand in its way. Such was the case when the Khans of the Ghost Bears announced in the early 3060s that they were relocating their entire Clan from the Homeworlds where they had been born to the planets they had conquered in the Inner Sphere.

Since then, the Bears have forged a union with the people of the former Free Rasalhague Republic that has the potential to become the first true melding of Clan and Inner Sphere societies. Though the Clan’s warrior caste is still the undisputed ruler of the nation, the people in the Ghost Bear Dominion enjoy a greater measure of freedom than those living in other Clans occupation zones. 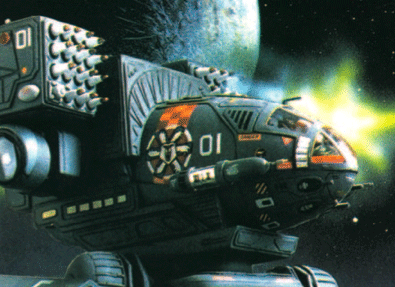 As befits its nature, Clan Ghost Bear was slow to enter the fight against the Word of Blake but once they did, they attacked with a vengeance. Even ostensible allies were at risk of destruction if they got in the Bears’ way. Though they remain tight-lipped about the reason for their extreme animosity, the Bears joined with Devlin Stone’s Coalition to eradicate the Blakists once and for all.

For the continuing story of the Ghost Bear Dominion, see Jihad: Final Reckoning…

During the long history of the Clans many interesting and unique individuals have made Clan Ghost Bear what it is today. Below are just a few of the movers and shakers who have had an influence on the Bears’ character.

Aletha Kabrinski has always been an atypical Ghost Bear. Aggressive where her comrades were cautious, hot-headed where they were calm, few would have expected her to rise to leadership over the whole Clan. Yet perhaps because of the challenges the Bears faced in the early months of the invasion, she was not only elected to a Khanship but has excelled in that position.

Despite the still-incomplete integration of the Free Rasalhague populace, Kabrinski has taken the lead in recent Ghost Bear actions, even personally commanding the assault on Luthien. Khan Kabrinski is poised to lead her Clan into a new relationship with the Rasalhague worlds. Whether she can keep control of the berserker fury unleashed by the Bears or whether it will consume everything she holds dear will be the question moving forward.

Even more than the legendary Phelan Kell, Ragnar Magnusson represents the union of Clan and Inner Sphere in a way that emphasizes cooperation and mutual respect. From his first days as a Clan bondsman, Ragnar has demonstrated that the integration of the two cultures need not be antagonistic.

Though a freeborn Spheroid by origin, Ragnar was able to prove himself enough to win a coveted Bloodname and even rise to the number two position in Clan Ghost Bear. During recent events, he has taken the lead in the effort to integrate his homeland with his new people while Khan Kabrinski commands the war against the Blakists.

Hans Ole Jorgensson was born in Rasalhague space in the early days of the Amaris regime and grew up dreaming of becoming one of General Kerensky’s soldiers. As soon as he could, he joined up with the SLDF in time to help liberate Terra and later followed Kerensky into exile in deep space. With his wife he tried to have a normal life but the chaos that led to the birth of the Clans drew him back into the warrior’s life.

He served as saKhan of the Ghost Bears for many years, finally stepping down after the death of Khan Tseng. Their legacy was carried forward by the Bears, who developed a tradition of electing those from the Tseng and Jorgensson bloodlines to lead them.

Like her husband Hans Jorgensson, Sandra Tseng was born in the early days of the Amaris regime and joined Aleksandr Kerensky’s SLDF when she was of age. The two met in the aftermath of Terra’s liberation and they gladly accompanied the General when he gave the Exodus order. During the hard years after settlement of the Pentagon worlds, the couple started a family but the chaos that destroyed Kerensky’s dream soon claimed their happiness.

When Nicholas Kerensky assigned Tseng and Jorgensson to separate Clans, they fled into the frozen wastes of Strana Mechty, where an encounter with a fearsome ghost bear changed their lives. Their devotion to one another swayed Kerensky and family became one of the essential characteristics of the Clan they jointly led.

The strength of a nation can be measured in the quality of its military and the men and women of the Ghost Bear touman are one of the Clan’s most important assets. Below are just a few of the iconic units that have defended the Dominion from its enemies for centuries.

For more information on the Ghost Bear touman, see:

As is the case in many Clans, Alpha Galaxy is the Ghost Bears’ premiere front-line unit. Originally commanded by founding Khan Hans Jorgensson, the Golden Bears have traditionally been the Khan’s unit, and always fight at the forefront of the Clan’s most important battles.

Alpha led the Bear charge against the Blakists on Luthien, with no communication to any of the occupying forces. They fought with unholy furor, sweeping aside any units that stood between it and the Word of Blake forces. No salvage was taken and great care was taken to kill every Blakist warrior they could find, even after surrender or ejection.

Less prestigious than Alpha Galaxy and featuring lighter units than Beta Galaxy, Delta Galaxy is the least favored of the Ghost Bear front-line Galaxies. Delta has always benefited from excellent leadership, such as Galaxy Commander—later saKhan—Roberto Snuka, who struggled for years to rebuild his command from the losses they suffered during the climactic battle on Tukayyid.

Delta saw heavy fighting during conflicts with the Draconis Combine and Clan Hell’s Horses in the years preceeding the Jihad. When the Bears erupted out of the Dominion against the Blakist menace, Delta and Beta spearheaded the counterassault that cleared out the Word on Pesht, though it cost the life of Roberto Snuka.

Carefully trained and indoctrinated in the ways of Inner Sphere warriors, Omega Galaxy seeks to fight fire with fire: to learn the ways of the Inner Sphere and employ them on the battlefield, while maintaining the spirit of a true Clan warrior. The Khans hoped that this Galaxy, by operating independently and never clashing with other Clans, could employ so-called dezgra tactics without blemishing the honor of its fellow Ghost Bear Galaxies.

As a Galaxy designed to face Inner Sphere opponents Omega Galaxy was uniquely suited to facing the Word of Blake threat. This saw the Galaxy committed to Luthien, where ironically they did not face Blakist forces but rather rebellious Kuritan regiments.