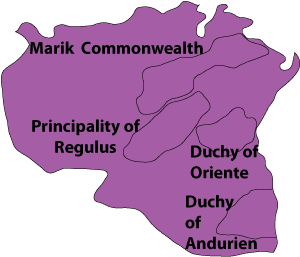 Unlike the other feudal realms of the Inner Sphere, the Free Worlds League is—at least on paper—a democracy. Although largely run by the Marik family for centuries (due to various circumstances and the provisions of an “emergency resolution” passed in the late 2700s), the League is actually a conglomerate of many smaller states and planets that allied long ago, and stands today as the oldest of the Successor States.

Though internally divisive by nature and riddled with bureaucracy, the League has existed in relative peace for many years, and even escaped the worst of the Fourth Succession War. A civil war nearly sundered the realm in the 3030s, but the League recovered and gradually rose in stature over the decades since, fighting only a small and very effective war in 3057 while harboring the breakaway Word of Blake after that group’s formation. Becoming the arms dealer for the Inner Sphere after the Clans’ arrival, the Free Worlds’ industry and economy boomed, but with the start of the Jihad, even the people of the League were not immune. Shocked to learn that their Captain-General, Thomas Marik, was actually an impostor set on the throne by ComStar many decades ago, the League has begun to unravel at its seams. Today, at least three leaders have risen with a claim to the title of Captain-General, putting the entire realm on the verge of collapse. 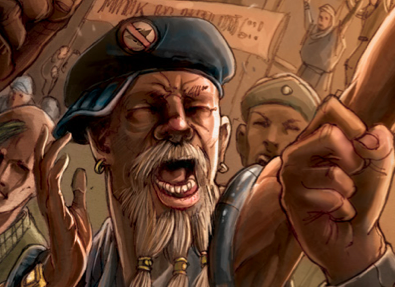 Defining itself as a nation of tolerance and open-mindedness, it comes as little surprise that the Free Worlds League also maintains an open market capitalist economy, which has helped to make it one of the most economically and socially progressive powers in the Inner Sphere. However, with a military made up of regional forces, the performance of its troops can vary with the political situation at home.

For the continuing story of the Free Worlds League, see Jihad: Final Reckoning…

During the long history of House Marik many interesting and unique individuals have made the Free Worlds League what it is today. Below are just a few of the movers and shakers who have had an influence on the League’s character.

The niece of Thomas Marik, Corinne supported her uncle but was in truth far more comfortable in command of the Second Free Worlds Legionnaires than in the political arena. With the revelation that Thomas was not really Thomas, she was placed in a position where she had to take on the responsibilities of Captain-General for the good of the nation, whether she wanted to or not.

Corinne has had to walk a fine line during the war. The Word of Blake controls much of the League and her own father, himself a ComStar adept and devoted younger brother to the Word’s shadowy Master, wields strong influence over her. Despite that, Corinne has tried to do what was best for her people and has worked to curb many of the excesses of the Word. As the Jihad begins to wind down, her continued role as Captain-General will become a pressing question for whatever survives of the Free Worlds League.

Thomas was the youngest son from Janos Marik’s first marriage and joined ComStar rather than participate in the politics of ruling the Free Worlds League. When his father became incapable of ruling and all of his older brothers and sisters had been eliminated from consideration, Thomas returned home to take up the office of Captain-General. He was thought killed in the same bombing that assassinated his father, but reappeared after a year with his injuries healed and ready to lead his nation. His term in office saw the growth of the League’s strength as they supplied material aid to the realms facing the Clans and his offering of shelter to the splinter Word of Blake faction was seen as a reflection of his past in the ranks of ComStar.

But it was all a lie. A year into their Jihad the Word of Blake revealed the truth to the entire Inner Sphere: “Thomas Marik” was in reality an imposter put in place by ComStar to control the League. This secret destroyed the trust that “Thomas” had built up and set the stage for the collapse of the Free Worlds League.

Succeeding as Captain-General after the death of his father, Stephen Marik, from cancer Janos initially envisioned his reign as one that would unite the Free Worlds League against its enemies and heal many of the internal conflicts that traditionally afflicted the realm. However, fate had other ideas. The loss of two wives and the death or disowning of four children within twenty years was followed by a Capellan-backed rebellion by his own brother. Anton’s rebellion in 3015 cost Janos not only his younger brother and another son but further wracked his troubled nation and left him demoralized and distrustful.

Lacking suitable heirs after the assassination of his eldest son Martin in 3018, Janos secretly designated his son Thomas, a scholarly man who had devoted his life to ComStar, as his successor. A stroke in 3030 left Janos unable to rule and he spent the last five years of his life preparing Thomas to take over. He managed to recover from his medical issues just in time to be assassinated by the same bomb that killed his son Duggan and seriously wounded Thomas.

The eldest daughter of the larger than life Albert Marik, Marion led an exemplary career in the Free Worlds military and gradually took over more and more of her father’s duties as he became involved with the founding of the Star League. When Albert died, Marion’s transition into the position of Captain-General was easily accomplished.

Though she was a strong supporter of the Star League, Marion was an even stronger advocate of moral and humane warfare. She led her troops against the Magistracy of Canopus during the Reunification War but insisted on following the Ares Conventions even when other Star League forces abandoned them in the face of strong Periphery resistance. This adherence to her principles was one of the main reasons that the Magistracy suffered less than the other Periphery realms and recovered faster.

The strength of a nation can be measured in the quality of its military and the men and women of the Free Worlds League Military are one of House Marik’s most important assets. Below are just a few of the iconic units that have defended the League from its enemies for centuries.

For more information on the League’s military, see:

Despite Thomas Halas’ hopes, the revelation of his true identity provided the catalyst that caused the Legionnaires to be cut down in number through a series of defections. With Corinne Marik’s appointment as Captain-General, the Second Legion has been posted to Atreus, where they have taken up the Honor Guard role formerly held by the First Knights of the Inner Sphere. The remaining Legions have suffered minor defections as well, primarily to Alys Rousset-Marik’s resistance, but as a whole they remain loyal to the office of the Captain-General.

The Second’s increased status has seen them lavished with equipment and technology, as well as placed them into a not-so-friendly rivalry with the Blakist unit on planet, the Fifteenth Division. The Blakists’ role as a “mentor” unit doesn’t sit well with General Parr, whose concerns have largely been ignored.

Since the shocking death of Colonel Princess Michelle Cameron-Jones, the Regulan Hussars have undergone an increasingly rapid expansion program, accelerating an effort that began after the reported visit of a Blakist envoy to the capital planet in early 3076. Currently there exist approximately twelve Hussar regiments, though staffing and equipment levels of the later-activated units are understandably low.

Newly promoted Colonel Lord Ihsan Hunter has taken over as the head of the First Hussars, despite having to face a trial by combat for the posting from one the former First Hussars’ command officers who had been stripped of his rank in the aftermath of the Purge. Hunter is nominally in control of the Regulus ground forces, but in reality General Thomas Orfelt retains overall command.

Forever the bulwark of the Free Worlds League military, the Marik Militia has borne the brunt of the fighting in the Jihad, from Jeremy Brett’s Operation Broken Fist to the various insurgency campaigns running rampant in the League. Despite this near-continuous action, the Militia has lost only a few regiments, both to defections and combat losses.

The Fifteenth Militia was almost annihilated in the mini-civil war that took place on Berenson when the pro-Blakist elements in the unit attempted to defect wholesale to the Word. The pro-FWL survivors have since joined Alys Rousset-Marik’s resistance.

To support its policies and goals, the Free Worlds League relies on a network of corporations to manufacture everything from consumer goods to computer equipment to military hardware. Below are just a few of the industrial leaders that create the infrastructure of League society.

Eight years of Jihad succeeded where every rival, government, and other forces of nature failed: IrTech—the beast—has been slain. Toppled and gutted by the very thorium-mine on which it has been thriving for centuries: internal strife.

On strategic and ethical levels, its neutral stance toward the World of Blake turned out to be the devil’s contract every critic warned about. By 3072, Word of Blake effectively controlled IrTech—and clamped down hard. IrTech’s leadership splintered in the following months. A rebellion amongst the upper echelon eventually succeeded in throwing off the Blakist yoke but the once mighty corporation-state is now shattered to the core, in three separate pieces. It remains to be seen who will pick those shards up.

Operating one of the few production lines for Inner Sphere OmniMechs available in the Inner Sphere, Kali-Yama stood in the spotlight from the beginning of the Jihad. However their dependence on export sales and outside protection saw them folded into the Word of Blake machinery when their home planet Kalidasa willingly joined the Blakist Protectorate.

The tally in 3075 reveals another Word of Blake pet industry, bereft of its former capabilities. On the plus side sits the fact that Kali-Yama’s production complexes remained intact—so far—putting the company a few steps ahead of its competitors.

Contrary to IrTech leadership, the Earthwerks board seems to have found the proverbial thin red line to walk, delicately balancing their decisions between pleasing the ever-dominant Word of Blake and secretly supplying the rapidly growing opposition.