Below you will find a selection of materials you can download and use for free.

A walk-through video and FAQ for the proof-of-concept BattleTech Companion app unlocked by the Clan Invasion Kickstarter.

These PDFs have everything you need to dive into the various ways in which you can enjoy the BattleTech universe at your gaming table. Only a selection of the total rule set is included to ease you in to things. A great, easy way to ‘test-drive’ the Beginner Box or a particular rulebook before picking them up, or even as a teaching aid.

Specifically designed to hurtle players onto the battlefields of the 31st century in minutes, it comes with everything you need to play – including a map and unit counters – you just need to bring your imagination and two six-sided dice! If you’re new to the BattleTechboard game, start here!

Alpha Strike is the fast-playing form of the BattleTech game of futuristic, armored combat. Developed for the modern tabletop miniatures wargamer, complete with sample armies, paper terrain and mech counters as well as a ready-to-play campaign system.

BattleForce is the BatteTech game of lightning-fast combat. These rules ramp up standard-style game play to a fast-playing system that retains the feel of BattleTech. While the full rules are contained in Strategic Operations, these quick-start rules contain everything needed to play a BattleForce game, including maps and counters.

A Time of War Quick-Start Rules

The Quick-Start Rules for A Time of War: The BattleTech RPG includes rules, recordsheets and a brief adventure to get you familiar with the game and its mechanics.

This Quick-Start Rules booklet for A Time of War: The BattleTech RPG was part of Free RPG Day 2012; while the rules are the same as the PDF above, it includes new characters and a new adventure!

If you want to play tabletop BattleTech with miniatures, here are the rules!

The Chaos Campaign is a system to run your own campaign in a variety of BattleTech‘s game systems. Intended to provide some depth, while keeping logistics tracking to a minimum, the Chaos Campaign system is used in many recent books. If you enjoy these rules, an expanded version appeared in Campaign Operations.

Players may find these black or pre-filled record sheets useful when starting out. Beyond these free record sheets, players will find the full line of print record sheets that include a selection of units from a given Technical Readout, as well as PDF-only Unabridged record sheets with all the various units and variants. 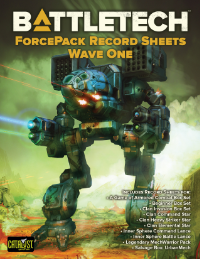 This is a booklet of sample record sheets for the following products: A Game of Armored Combat Box Set, Beginner Box Set, Clan Invasion Box Set. 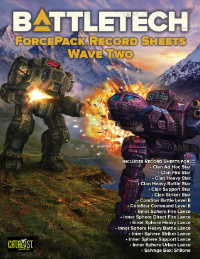 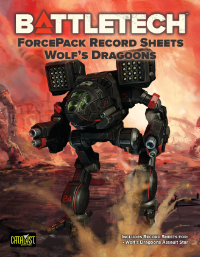 This is a booklet of sample record sheets for the Wolf’s Dragoons Assault Star. 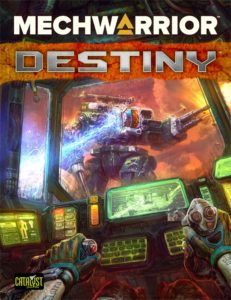 This is a booklet of blank record sheets, perfect for setting up and playing your MechWarrior Destiny RPG games. 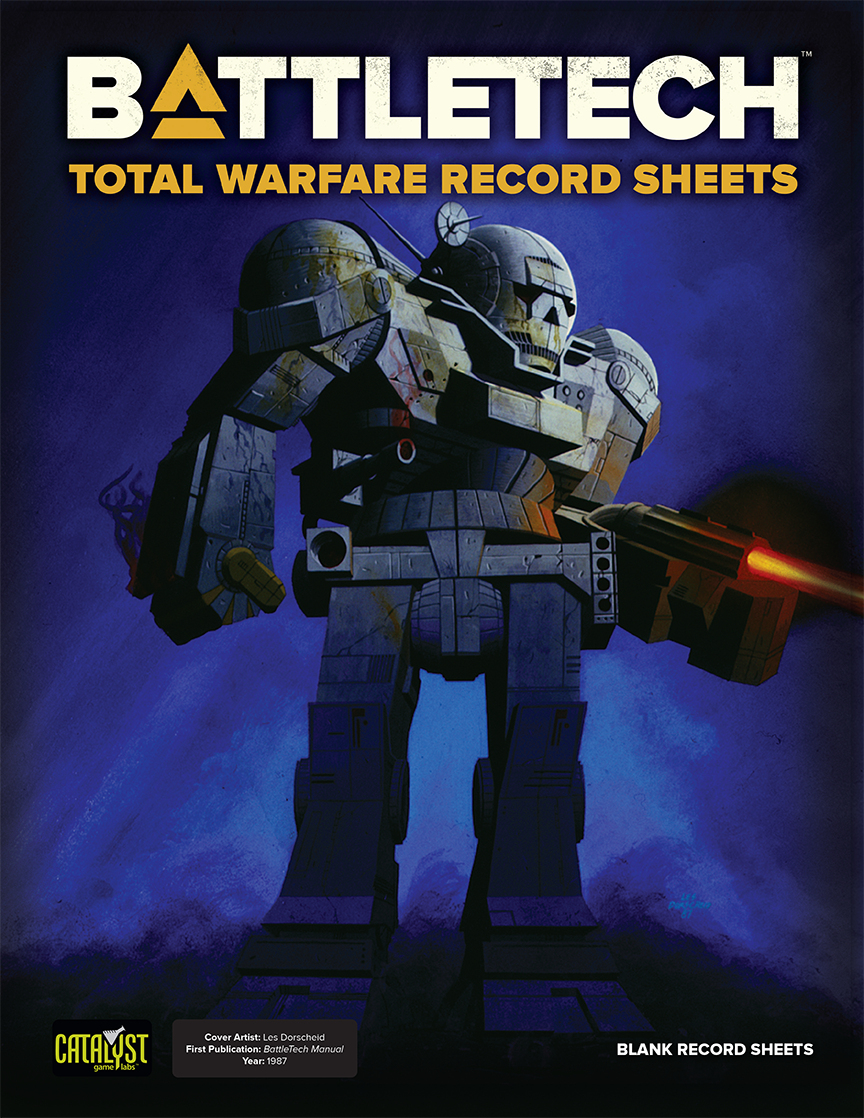 This is a booklet of blank record sheets, perfect for filling out with copies of classic BattleMechs or your own creations. 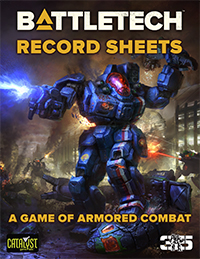 These are the same record sheets found in the A Game of Armored Combat, provided for ease of printing-out and using; also includes a sheet of BattleMech counters players can print out and use.

These are the same record sheets for the BattleMechs found in the Wave Two ForcePacks, provided in a single collected download for ease of printing-out and using.

The existing record sheets for the Long Tom Mobile Artillery unit are invalid under the current ruleset. As such, we are making corrected record sheets available for download so that players can use the Long Tom in official play.

As some fans may not have the rules for the Battle of Tukayyid maps, CGL is making them available here on the website so everyone with the maps can enjoy them.

If you enjoy playing the BattleForce game included in the Strategic Operations book, you may find these counters useful in your games.

A full line of faction-specific BattleForce counters is available.

These are the basic counters as presented in Strategic Operations.

Full BattleForce counters for a variety of rules, including buildings, fire and smoke, minefields and more.

HexPacks are a flexible map system aid for the BattleTech game system. Designed for use in conjunction with other pre-printed mapsheets (such as those from the Introductory Box Set), the system’s flexibility allows for easy modifications to existing mapsheets. Below is a PDF that expands upon a promotional HexTile released alongside HexPack: Cities and Roads.

An expanded PDF of additional pre-constructed buildings, and DropShip record sheets, based upon the rules sheet found in the DropShip Promotional HexTile connected to HexPack: Cities and Roads.

Solaris VII. The Game World. Where novice and veteran Mechwarriors come to try their hand at fame and fortune – or go down in flames, forgotten and penniless. This tournament attempts to immerse participants in the glitz, glamour, danger, and risk of arena combat and the ever-fickle attention of the audience. The brutality of Mech combat takes second seat to the all-important make-or-break attitude of the audience. Players in this tournament participate as a pilot, gaining Fame and Wealth based on showmanship, battlefield savvy, and experience while participating in combat, sponsorship, and stable membership.

This tournament offers players the opportunity to wage honorable battle to be one of the 25 Bloodnamed warriors sharing in the legacy of one of the Clan’s founders. Genetically engineered and bred for centuries for honor and glory, Clan warriors lust for a Bloodname for years and many never make the cut. Can you win the Trial of Bloodright?

Included in the Box Set is a handy Table Card on card stock, that has many of the frequently used tables of the Board Game. You can use this PDF to print some of your own. It probably helps if you can also print it on cardstock, or thicker paper.

The Inner Sphere At War rules section of Interstellar Operations scales battles all the way up to the largest scope. The rules allow players to tackle House Leaders and Clan Khans in conquests of the entire Inner Sphere.

Now, three of the maps promised in IO are now available for free download below. Go grab ’em and re-unite the Star League!

Capturing the borders and political affiliations of the Inner Sphere at the end of the Third Succession War, this map presents the perfect springboard for playing out the Fourth Succession War or making your bid to put your chosen House on top!

With the planets and borders on the eve of the First Succession War, this map puts you in the position to correct the mistakes of the past and claim your place as the First Lord of the Star League for one of the Houses.

Representing the Inner Sphere on the eve of the Second Succession War, this map is the best way to start your path to becoming the First Lord as war once more consumes the Inner Sphere.

A collection of various scenarios and source material that have been published online.

Prior to launching Operation ANGEL REQUIEM to attack the Word of Blake’s Gabriel outpost, Chandrasekhar Kurita and his people gathered information on the mercenary commands who would participate in the assault. These files, along with Hachiman Taro corporate notes and information on the Word’s Hidden Worlds, were released to the public during GenCon 2009.

The Dark Age period represents a jump forward in time of some five decades from the end of the Word of Blake Jihad in 3081. The following documents can be used to catch up on the events, personalities and changes of the new setting.

An in-universe look at the major factions, their histories and their status quo as of 3130.

A brief examination of the Republic’s government and history. Also includes short biographies of the prominent personalities of the early Dark Age era.

A gazeteer of the worlds that compose the Republic. (Note: Not all worlds are fully described.)

Collections of in-universe news articles and personal journals that paint a vivid picture of life in the mid-32nd century from just before the HPG blackout into the years of Fortress Republic.