Continuing the celebration of 35 years of Battletech, we’re thrilled to announce that two Print on Demand novels are available now that represent both the earliest days of Battletech fiction and the latest fiction to come out. 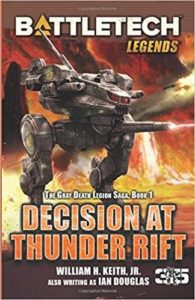 First, going back to the early days of Battletech, we present “Decision at Thunder Rift” by William H. Keith

THE FIRST NOVEL IN THE EPIC SAGA OF FUTURE WAR…
Thirty meters tall, seventy tons of quick-striding death and destruction, the armored war machines called BattleMechs are the front-line forces of the crumbling star empire locked in the horror of the endless Succession Wars. Their pilots are MechWarriors, 31st-Century knights riding armored machines powerful enough to take a city apart.
Grayson Death Carlyle had been training to be a MechWarrior since he was 10 years old, but his graduation came sooner than expected. With his friends and family dead and his father’s regiment destroyed, young Grayson finds himself stranded on a world turned hostile. Now he must learn the hardest lesson of all: it takes more than a BattleMech to make a MechWarrior…
But to claim that title, all Grayson has to do is go out and capture one of those giant killing machines…if it doesn’t kill him first. 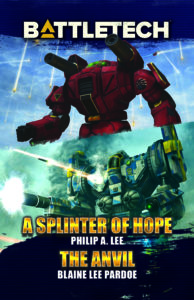 A Splinter of Hope / The Anvil Omnibus

Next, at the other end of the spectrum, we have the Omnibus of “The Anvil” by Blaine Lee Pardoe and “A Splinter of Hope” by Philip Lee!

VICTORY AT ANY COST…

Jump into your BattleMech cockpit, fire up your fusion engine, and charge into the fray with two all-new BattleTech novellas from Philip A. Lee and BattleTech veteran Blaine Lee Pardoe.

A Splinter of Hope: Violent expansion of the Capellan Confederation and the Draconis Combine has cost recently crowned First Prince Julian Davion both his mentor and countless Federated Suns worlds. To rally his people, he funnels the fires of justice into an ambitious yet risky campaign to retake a vital system: New Syrtis, the occupied capital of the Capellan March. However, the Capellan people have fought dearly for their prize and will do anything in their power to hold onto it. Will Julian’s gamble preserve the future of the Federated Suns, or is the invasion doomed before it even begins?

The Anvil: Khan Malvina Hazen of Clan Jade Falcon is known throughout the Inner Sphere as a merciless, bloodthirsty tyrant. The next target for her scorched-earth, take-no-prisoners tactics is the Lyran Commonwealth world of Coventry: a persistent stain on the Jade Falcons’ history. But not all Falcons follow Malvina’s lead. Ordered to take Coventry at any cost, Galaxy Commander Stephanie Chistu wishes to see her Clan victorious, but no victory is worth the Jade Falcons losing their very soul. To stand up to tyranny and find an honorable path forward for her Clan, she must balance the razor’s edge between duty and honor—or die trying.