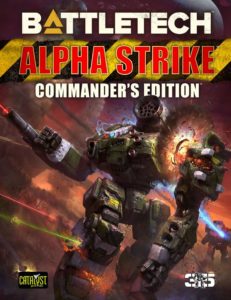 As part of an ongoing series of reprints of the core BattleTech rulebooks, the primary Alpha Strike rulebook was given the green light for a new printing. But unlike the other rulebooks, we wanted to make more than just a simple reprint with errata. Alpha Strike is relatively new, and there had been some additions in the Alpha Strike Companion that we really wanted to make part of the standard Alpha Strike game.

We also reviewed feedback received over the years from fans and from the Catalyst Demo Team, to see where they thought Alpha Strike needed to go. And we had some new presentation options for BattleTech rules from the BattleMech Manual that we wanted to carry over (steal) for Alpha Strike.

The full errata document will be posted, and it has the very specific changes made to the previous edition. But as most of us know, it’s written in “errata speak” of the very precise changes made to the text. But it doesn’t say why those changes were made—it’s without context. “Add ‘don’t’ before the first sentence of the second paragraph” is very precise, but it really needs the context to understand it.

Below is a developer’s overview of the changes made in Alpha Strike: Commander’s Edition. We hope this will help you make sense of what those changes are, perhaps serve as guide to what you might want to take a longer look at in the errata or read first in the new rulebook, or just explain some of our reasoning for changes that may seem random.

First, take a look at the Table of Contents preview that was previously released. You will see several new sections, particularly the Force Building, Special Pilot Abilities and Special Command Abilities from the Companion. We also have Battlefield Support rules we borrowed from the BattleMech Manual. These rules allow you to add aerospace strikes, artillery strikes and minefields as support options without adding additional units.

The three biggest changes, other than adding material from the Companion and the BattleMech Manual, were to TMM (Target Movement Modifier), aerospace and artillery.

When we began developing a new edition of Alpha Strike, there was a change that I’ve always wanted to make to the game. Total Warfare calculates the distance a unit traveled that turn, ignoring movement spent on terrain costs, facing changes, etc. to determine how hard that unit is to hit: the Target Movement Modifier. Alpha Strike changed this to using Available Move, removing the need to measure and calculate how far a unit moved each turn. You only needed to calculate a unit’s TMM again if heat or damage changes its Move rating.

The Commander’s Edition goes a bit further. All references to calculating Target Movement Modifier (TMM) based on Available Move were removed. Now it’s all based on the TMM printed on the Unit Card. For example, Critical Hits now state an effect on TMM, and Heat lists an effect on TMM. It’s not 100 percent the same as before; I did not want to get into “If it has a Move of 12 inches, then the first MP Hit has no effect on TMM, but if it has a Move of 10 inches, then it does…” The whole point was to remove that kind of calculation during gameplay.  We did add some new Special Abilities (JMPW/JMPS and SUBW/SUBS) in order to note which units stray from the pure ground TMM +1 for jumping because they have weaker or stronger jumping/submersible movement, such as Improved Jump Jets, that doesn’t match their ground Move.

With Commander’s Edition, aerospace play always takes place on the Ground Map—we removed the Radar Map entirely. The Radar Map primarily just delayed the use of aerospace, and we kept adding errata to try and make aerospace more worthwhile. With Commander’s Edition we finally just put them on the map from the beginning and left them there. They still zip across the entire map—you won’t be making turns on the map. But they are always available until they’re destroyed. If you want to delay aerospace in the scenario, use a reinforcement rule just like you would for ground units, i.e., “Aerospace forces will arrive as reinforcements on Turn 3.”

This led to some changes in air-to-air combat, which now uses the flight paths to calculate range, not control rolls.

In addition, aerospace units now choose an altitude when they place their flight path. Primarily this affects range calculations to and from the aerospace unit, and can also limit which air-to-ground options the unit has available. Placing your aerospace assets at higher altitude is much safer; because they’re at longer range they’re harder to hit, and the effect of failed control rolls is MUCH less risky at higher altitudes. But if you want to strafe and/or dive bomb, you need to be at lower altitudes.

Partial Cover and Woods: Were both lowered to providing a +1 to-hit modifier instead of +2.  Heavy (+2) and Ultra-heavy (+3) Woods are still Terrain options. But the default Woods modifier was lowered to +1.

Formation Bonus Abilities: Converted most of these to apply based on a percentage of the number of units in the formation, so a Level II won’t be gimped by taking Fire Lance, for example. The impact on Lances should be the same as before, but Stars and Level IIs may benefit.

Critical Hits on Natural 12: Pretty much says it all right there.

Separate Attack per point of damage: This has been a popular house rule for a while, and Commander’s Edition adds it as an option.

Novas: Renamed “Combined Transport” and “Infantry Formations” and given some bonuses. There are two versions: Novas and Mechanized. Novas are directed more at mounted combat, while Mechanized is intended for situations where the transport is more purely transport. Despite the name, either version can be used by any faction.

Water and Heat: Slight rewording and change where water always drops the unit’s heat level by 1.

Force Lists for the Gray Death Legion versus the Red Duke’s personal unit and the Eridani Light Horse versus Smoke Jaguars.

The BattleTech to Alpha Strike conversion rules and PV calculations for units are not included. They are planned for a separate release, though work has not even started on that: it’s a plan, not an active project right now. No changes to either conversion or PV calculations were made for Commander’s Edition other than the addition of Jump and Submersible special abilities.

And finally: it’s got an Index!