To mark the 30th Anniversary of their release, we are proud to announce that the Michael Stackpole penned “Warrior Trilogy” will be available as both ebooks and Print On Demand (POD) starting December 22 (12/22).

Here are the links to hub pages so you can purchase from your preferred provider: 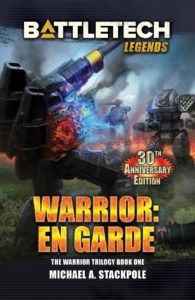 ’MECHS AT THE READY…

Betrayed by his own House and stripped of his rank, exiled Mechwarrior Justin Allard is given one last chance to save his honor—by risking his life in the gladiatorial arenas of Solaris VII. But his newest Game World opponent—more skilled at ‘Mech-to-‘Mech combat than any other rival—raises the stakes even higher. It’s Philip Capet, former mechwarrior in the Davion military—until he was kicked out by none other than Justin Allard before his own unfortunate fall from grace.

Both Justin and Philip face fierce battles, but in the Inner Sphere, where nobles have schemed for centuries to win the ultimate power, those who interfere with the Successor Lords are sometimes called heroes. 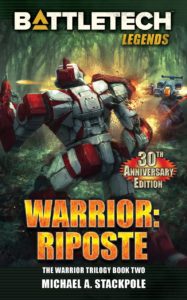 THE GAUNTLET IS THROWN…

Hanse Davion and Melissa Steiner have united two Great Houses of the Inner Sphere in a marriage that upsets the balance of power among the stars. Though some hope this may bring an end to centuries of war, Maximilian Liao of the Capellan Confederation has enlisted the aid of two highly placed Davion traitors to destroy Hanse Davion and the Federated Suns from both within and without.

But in the distant star chambers of the Capellan March and Draconis Combine, the warlords of Maximilian Liao are honoring a different and more deadly vow: to wage an unholy war that threatens to rip apart the vulnerable worlds of the Federated Suns. As Davion ’Mech commander Andrew Redburn and his mercenaries streak into battle, an explosive clash of metal and men signals the return of a formidable foe. Interstellar legend Yorinaga Kurita has returned to stake his claim as the most bloodthirsty warrior of all. For both men, it is do-or-die combat that could ensure the triumph of a glorious new alliance—or result in total annihilation… 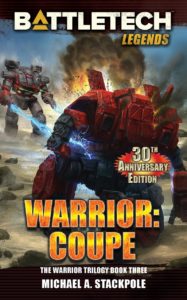 The minions of Maximilian Liao are about to deliver a crippling blow to the forces of Prince Hanse Davion—discovering a way to use Hanse’s own technology against him.

Half a galaxy away, assassins stalk Hanse’s wife, Melissa Steiner, and her mother, Archon Katrina Steiner, in the passageways of their own palace.

Invasion is imminent. The only ’Mech force capable of stopping that invasion—the Kell Hounds mercenary unit—is trapped in a game of search and destroy with the most fearsome Kurita unit ever created. Even if they come back in time…how many would make it?

In a world where ten-meter-tall war machines are the soul of battle, assassins are state policy, and a spy’s loyalty is always for sale, the only thing certain is death. Who can you trust? And in the bitter end, how will you be betrayed?

Please Note! POD may not be available at the same time as the ebook goes on sale. It can take longer for POD titles to propagate through the various systems. This is beyond our control.